THE TOMS PAULI FOUNDATION AND THE LEGACY OF THE INTERNATIONAL TAPESTRY BIENNALS HELD IN LAUSANNE, SWITZERLAND, 1962-1995

For over thirty years the International Tapestry Biennials were held in the city of Lausanne, making it the world capital of contemporary textile art. The event had come into being thanks to the encounter of Pierre Pauli (1916-1970), the then director of the Decorative Arts Museum in Lausanne, with Jean Lurçat, the French painter and tapestry designer, who had instigated the revival of French tapestry after World War II. In 1959, Pierre Pauli mooted the idea of giving modern tapestry greater visibility and thus opened the way for the creation of the Centre International de la Tapisserie ancienne et moderne (CITAM). This organisation, presided over by Jean Lurçat until his death in1966, put on sixteen shows which, for three consecutive decades, constituted major landmarks on the international textile-art scene.

The Lausanne exhibition was the first platform – and for many years the only one – to give textile artists the opportunity to explore new techniques and materials. As a result, textile art enjoyed thirty years of spectacular development. Artists began abandoning cartoons in favour of autonomous weaving, transforming the classic wall tapestry into a form of spatial and environmental art. They investigated the technical and expressive possibilities of unusual materials, as well as inventing and implementing new techniques. Alongside the classic French method of high-warp and low-warp weaving, a whole new world of three-dimensional textile art made its appearance at the Lausanne shows. The Tapestry Biennials gave textile art the chance to assert itself on the contemporary art scene as an autonomous artistic expression, and win public recognition.

The Foundation was set up in 2000, soon after the disbanding of CITAM, with the mission to preserve the memory of the Lausanne Biennals. It manages a collection of 165 textile works which includes wall pieces, reliefs, textile sculptures and installations. The works were created by internationally acclaimed artists who had exhibited at the Biennals, including Magdalena Abakanowicz, Jagoda Buić, Olga de Amaral, Ritzi and Peter Jacobi, Elsi Giauque and Naomi Kobayashi.

The Foundation’s mission is also to research, preserve and bring to public attention the Toms Collection, an important grouping of sixteenth- to nineteenth-century tapestries and embroideries, bequeathed to the State of Vaud by Mary Toms, in 1994. The Foundation, which is based in Lausanne, is not yet endowed with its own permanent display space but organises exhibitions in museums in Switzerland and other countries, and publishes catalogues. The collections can be viewed during temporary exhibitions. 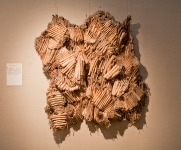 2 Responses to The collection of Lausanne textile biennial artworks