WOMEN IN THEIR FIFTIES. PYTHIAS

Oeuvre of Laima Oržekauskienė unfolds through giving carefully considered sense to ritual and attention to origins and traditions of the phenomenon which enables deeper knowledge. The artist interprets a ritual as well as implements it. She identifies herself with the ritual as she weaves millimetre by millimetre. In solitude. Week after week. Every single detail of the image she weaves is meaningful – motif, pattern, technique, material. In her artwork the artist employs rich heritage of global culture and seeks for codes that affirm feminine entity or invents them herself.

In her best known cycle of four tapestries called “Women – arhats: Danutė, Lina, Violeta, Kristina“ (2003-2005) Laima depicted women and gave them names, but escaped personalization of image. Woven on golden background female torsos (there are no faces) little by little make a turn towards the horizon as saint arhat statues do in Buddhist temples.

In the cycle of fifty-year-old pythias that consists of eight pieces the artist again sees the woman as sacred. In ancient Greece, pythias played the role of clairvoyants – divine mediums that provided oracles with prophecies. Oracles in their turn translated these prophecies to inquirers. There were several ways to become a pythia, but usually it was a middle aged woman with developed inner sight to play this role. They were able to switch to fourth dimension – spiritual dimension. Her cycle “Women in their fifties. Pythias” makes it clear that Laima Oržekauskienė sees the fifties as the age of feminine wisdom, harmony and spirituality. She represents the fifties by woven images of her eight female friends. They started in their childhood and have walked quite a distance together. Memories, shared experiences, difference in nature, likes and dislikes are represented through patterns and “accessories” that decorate the figures of these women. Although these women have no name, they can be easily recognized, except that their eyes are mysteriously pointed towards the horizon (the same way as the arhat torsos are turned) as if they were waiting for prophecy from heavens to be handed over to them. Routines and purity (women are almost or completely naked) are employed as a metaphor for verity and self acceptance, because what coats us in the course of decades is part of the image but does not represent entity. To be able to appreciate own body as a soul vessel, one needs maturity and sobriety that allow to comprehend causality of a phenomenon. That is what Pythias’ prophecy represents.
Virginija Vitkienė 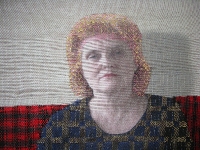 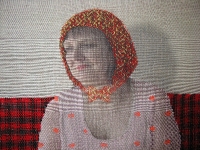 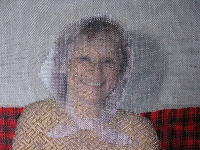 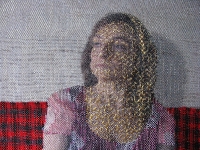 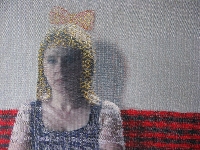 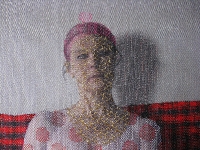 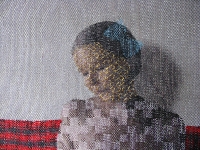 One Response to Laima Oržekauskienė’s personal exhibition “Women in Their Fifties. Pythias”