I don’t remember much about my childhood. We lived in Moscow, near the famous Lefortovo prison. A friend of mine had windows with a sight of a prison yard, where political prisoners walked around. Adults jokingly frightened us with this jail, and we were really scared to pass it by. But all this was somewhat unreal or irrelevant, as if it was seen with peripheral vision.

Like all children of the same age I was more interested in everyday life which surrounded me. At first I was an octobrist, then – a pioneer, and later – a young communist. I studied at school, went into sports and visited pioneer camps. I was keen on music and designing. I was a reasonably happy child with a lot of friends and a lot of things to do.

My dad did military service in bicycle infantry. Such military units in fact were still in use at that time. Being a professional sportsman before the war, he became a bicycle instructor in the army. He used to tell us often, me and my younger sister, a story about him being sent back to the home front with a mission to return with bicycle spares, just a few days before his regiment went to battle and was totally destroyed.

My parents met after the war. Dad taught physical culture in the institute where my mother studied math, and soon they liked each other. She came to Moscow from Yaroslavl, young and beautiful on the old photographs. As an officer and institute teacher my dad received special ration, including tinned stew, condensed milk and even chocolate. He even had a separate room in a dormitory, and very soon there were already four of us living there. That’s all what I was told about my parents’ love-story.

And then I grew up, got married and gave birth to a son, who now already has a family of his own. Life is passing very fast, in fact.

I often watch through old photos depicting my parents young and myself as a child. It’s like life on a different planet, in a different world which is gone forever. I can revive some of the shadows on the pictures, but it is now difficult to say what really happened and what didn’t.

Does memory at all exist? Or is it only the imagination of the past? 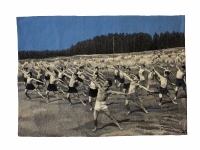 One Response to Altman, Lia