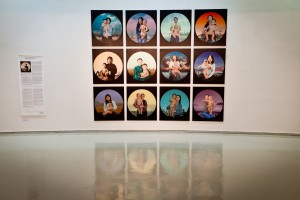 In this video – broadcast ALCHEMY – artist speaks from 2 min: 35 s

This is a story about 12 mothers and their 12 children, and the 12 animals of the Chinese zodiac. All of the 12 mothers and their children, now living in Beijing China, were originally from 12 different provinces of China. They all came to the big city of Beijing with their husbands who are construction workers building the new China.

Greatly moved by the beauty of Italian Renaissance painting, and most especially the Madonna and Child symbolism, I sought to imbue the new China art with the same spirit. During the process of creating this work, I gradually found the understanding of the connection between the Chinese society of today and Italy of the Renaissance. The current conditions manifest the same gaps in cultural and wealth distribution in these two cultures.

I began this project with a casting call to find the best mothers and their infants to express the dichotomies of the new China society and the rapid development of the new China economy. The mothers came from distant villages all over China. Their husbands were low-wage workers in the construction sites. In Twelve Moons, the children are 3 to 8 months old, a period of the most rapid physical growth, as the new China is emerging after stunning growth.

The Chinese zodiac is a 12-year cycle. The birth-year animal is believed to be the determining factor in each person’s life. The background of each photograph is a composite of several digital photographs: a “mash-up” of the new and the old China.

Firstly, the relationship between the mother and the child. The mother always takes care of the child; she is its body and spirit’s protector and legal guardian, she plays bearing and production roles. From the ethnic and the propaganda viewpoints, she performs her duties. But as an abstract reproducer, she brings a citizen of future, a valuable person and a hero of the future. Due to the family planning program, Chinese mother can only bear one child, that’s why the individual value of every new-born baby has risen. However, because of Chinese huge population and special political and economic background, the baby’s social value hasn’t risen. As objects of production and reproduction, children have different feelings in family and society.

Secondly – the relationship between heroes and composition. The composition and colouring of “Chinese Mother” made this work fill with serious feeling of western classic painting. Its circular composition made people think of the Holy Mother and the Infant in Renaissance, such as Michelangelo’s “Holy Family” （Sacra Familia, 1503-1504 and Raphael’s “Chair of Notre Dame” (1514) and so on. Circular composition tells people that the universe is endless, no beginning and no ending, which is related to the holiness in the western holy images. Beside the western classic art factors, I tried to give us a hint of Chinese traditional space concept reflecting in sociology, such as round heaven, square earth which equals to male dominant society and discourse systems in sociology. Around mother and baby, there is male dominant discourse system. They are under male dominant social round space, disciplining, teaching and relying.

Thirdly – the relationship between the infant and tattoo. Reading the work carefully, you will find there is a Chinese zodiac animal tattoo on every baby’s body – a pictographic symbol. Heavenly Stems and Earthly Branches is regarded as Chinese traditional time measurement way, which is different from western time measurement way. It not only measures time, but also reflects one’s fate.

Fourthly – the relationship between heroes and background. There is a specific social background behind each hero. They are grouped into a number of simple geographical landmarks and living environment, such as the building in the core city, the political institute, the reconstructive scenic area, the huge construction area, the Imperial burial Guard, the modernized parking area and the city, the developing village and so on.

These surroundings reflect that China is under modernization. After 30-year’s rapid development, Chinese living and social environment is full of progresses and negative effects. Modernization provides the Chinese mother and her child with an expecting and upset maze stage. The dual attributes in the Chinese infant are producer and reproducer, who will come across each other in this stage. Specific Chinese happiness and unhappiness will be with them, just like the Chinese modernization context they live by.

Finally, about eloquent textiles, which reveal in these pieces through the clothing of the mothers. I asked each mother to select a piece of clothing that is considered exquisite. On the day of the Photo shoot, they came in their selected clothing, which were considered as their most valuable at the moment. 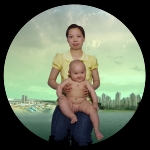 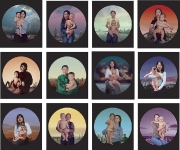 One Response to Yuan, Gao