Artists’ personal stories are brought to life through textile connotations at the REWIND PERSONAL STORY competition exhibition (idea by Virginija Vitkienė). The narrative as a new strategy of contemporary art is intertwined here with a specific task. This task is to speak through textile, which is understood as a connotation, a hint, a conceptual mediator of experience. There were over three hundred applications from 43 countries, with 31 projects chosen for the exhibition. The commission considered the applications in three stages: at first they each looked through the applications, then upon meeting they considered them a few more days, delving into the story that is conveyed by each artist’s image or text and attempt to get an overall picture of the exhibition. Experts from different fields were invited for the work of the jury. Beatrijs Sterk (Germany, who is the Secretariat of the European Textile Network and editor of the international magazine Textile Forum, with wide-ranging expertise on textile as a spectrum of a pure genre on an international scale. Sarah E. Braddock Clarke (U.K.) is a lecturer of History and Context Studies at Falmouth University College. She is an expert in new technologies textiles and the co-author of the very important Techno Textiles publications, and is currently putting together yet another collection of research articles called In Code. She studies the newest examples of the interplay of textile art and science, well-versed in the field of textiles and experimental design practices. Two Lithuanian art critics, Virginija Vitkienė and Monika Krikštopaitytė, analyzed works in the context of contemporary art strategies and relevant issues, looking at textile as a conceptual tool for creative decisions and looking for the works that best fit the conditions of the competition. Professor, biennial board head, and textile artist Laima Oržekauskienė (Lithuania), who is a Lithuanian National Culture and Art Prize Laureate, felt the responsibility to put together a collection that would reflect as comprehensively as possible the Kaunas Biennial’s goal to be an event that is dynamic, constantly re-thinking its work and questioning the limits of textile. With the collegial agreement between the members of the jury, textile cannot be simply textile anymore in the contemporary art field, or tapestry only a tangled web of aesthetic wefts and warps, while needlework or patchwork is a work of art, but not because of technique. Technology, genre, material and the method are just tools for stories that unite the participants of the exhibition in a common experience in order to tell their stories. The competition exhibition Rewind Personal Story features textile life stories as told by Tilleke Schwarz (the Netherlands), Alice Kettle (UK), Wang Haiyuan (China), Watanabe Misao (Japan), Beili Liu (China/USA), Rasma Noreikytė (Lithuania), Laisvydė Šalčiūtė (Lithuania), Ainsley Hillard (UK), Andrea Milde (Germany/Spain), Michaela Melián (Germany), Nina Bondeson (Sweden), Sonja Andrew (UK), Marion Michell (UK), F4 Artist Collective [Susan Jowsey/Marcus Williams] (New Zealand), Fiona Kirkwood (South Africa), Lina Jonikė (Lithuania), María León (Spain), Kyung–ae Wang (South Korea), Rūta Naujalytė (Lithuania), Monika Žaltauskaitė-Grašienė (Lithuania), Monika Kreivė (Lithuania), Amélie Brisson-Darveau (Canada), Katie Waugh (USA), Kristina Čyžiūtė (Lithuania), Marion Coleman (USA), Katya Oicherman (Israel), Virginie Rochetti (France), Gao Yuan (Taiwan), Signe Kivi (Estonia), Lia Altman (Russia), and Tonje Høydahl Sørli (Norway).

In the category of invited artists for this exhibition, we introduce artists who have achieved much in textile and other spheres of art and who have worked creatively with the biennial for many years. Annika Ekdahl (Sweden), who has presented many of her personal and group projects at the Kaunas Biennial, this year invited University of Gothenburg colleague Birgitta Nordström and textile students to join in a cooperation project that interprets her tapestry theme “For the Body”. Silja Puranen (Finland), a winner of the Nordic Award in Textiles and a Kaunas Biennial Laureate (2003), was invited to organize an exhibition and cooperate with choreographer Anne-Linn Akselsen (Norway), so they could present textile to the visitor through movement and bodily emotions. This and other dance projects where visual art and movement elements are joined are called Moving Textiles (the projects are coordinated by biennial partner Aura Dance Theatre). World famous street art stars Otavio and Gustavo Pandolfo-Osgemeos (Brazil) are friends of the Kaunas Biennial since 2007 when they participated together with their mother Margarida Kanciukaitis Pandolfo, who has Lithuanian roots, in the presentation of a Brazilian collection by painting the facade wall of a museum with fantastical motifs. This year they will be working inside the Kaunas Picture Gallery, once again inviting their closest family members to create a visual history of their family’s emigration. German choreographer Johannes Wieland will create a dance performance on the theme of melancholia for their installation. Long-serving Kaunas Biennial Director and idea generator Vita Gelūnienė (Lithuania) finally returns to the biennial as an artist, presenting her newest tapestry in an original way: she has interpreted the medieval mille-fleur style in a weave, working together with choreographer Birutė Letukaitė and video artist Evaldas Jansas (Lithuania). The characters of the work are revitalized in the stylized video performance, which temporarily blocks the path toward the work. Kaunas Biennial laureates Inga Likšaitė and Patricija Gilytė (both Lithuania/Germany) also join the program with dance collaboration projects. Inga Likšaitė, who regularly works with textile, will open her exhibition with an originally directed dance performance by Kennet Flak and Külli Roosna (Estonia), which was created by five artists from different European countries. Meanwhile sculptor Patricija Gilytė, who often uses foam in her work (including sculptures, performances, and video works), gives an extra sense of the passing of time to this soft material, and also a metaphor of existential experience, i.e. emigration as a desert, working together with Portuguese choreographer Ne Barros. Eglė Ganda Bogdanienė (Lithuania), who is one of the brightest and most active Lithuanian textile artists, was invited to present a personal exhibition that reflects her personal experience. Biennial friend Almyra Weigel (Lithuania/Germany) presents a dance performance at the biennial, working together with choreographer Birutė Letukaitė, in which intrigue is created through material used over the last decade by Almyra Weigel and a visual meaning. The works of Hiroko Watanabe (Japan), who has been in Kaunas before (earlier as a consultant and exhibition visitor), speak with a subtle contour, finished form and expressiveness of color, as suits Japanese aesthetics. There are also a few artists who have been invited who are making their first appearance at the Kaunas Biennial: VALYA (Valentyna Roenko), who is an American artist of Ukrainian descent, tells her family history through the archetypical image of the mother of humanity (Rus. “baba”) with a gigantic work that uses an archaic felt technique. Young Taiwanese artist Min Tzu-Chao (who recently finished her M.A. studies in London) reveals the mentality of her nation and aspects of the change in family relations through the interpretation of wedding clothes through four generations of her family. One of the most famous British artists, Yinka Shonibare, MBE, is being presented not only at the Kaunas Biennial for the first time, but for the first time in Lithuania. The artist, who finished with an MFA from Goldsmiths, University of London (the professors of which the Kaunas Biennial has worked with since 2007), has touched upon his dual origins (Nigeria and the U.K.) by employing costumes and weaves of them, as a tool for the representation and connotation of social status since the 1980s. Working together with the James Cohan Gallery (New York), this year we will present both of Yinka Shonibare’s films A Masked Ball (2004) and Odile and Odette (2005), where stories are told through textile and the body, just like in the Moving Textile program created by the Aura Dance Theatre and the biennial, just in the case of Yinka Shonibare, the music is eliminated, and done colorfully and with tension in a different way, to the point of uncomfortableness achieved in a different way.
Virginija Vitkienė

PHOTO REPORT FROM THE OPENINGS 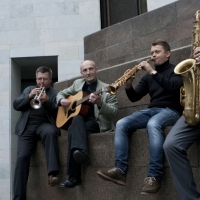 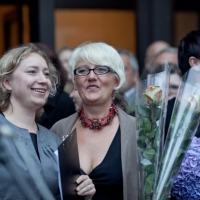 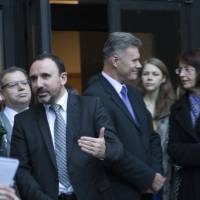 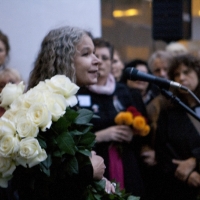 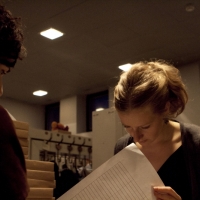 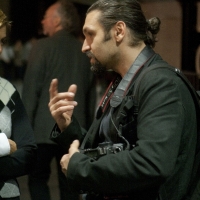 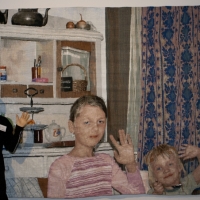 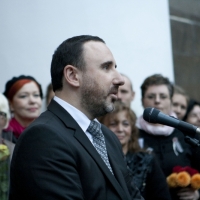 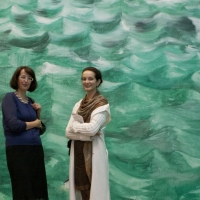 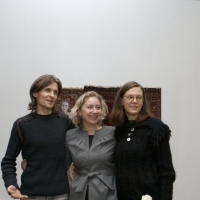 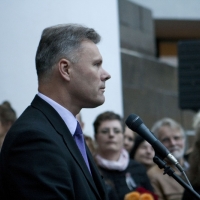 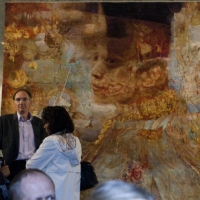 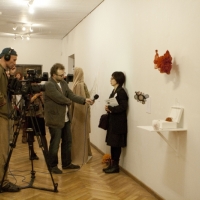 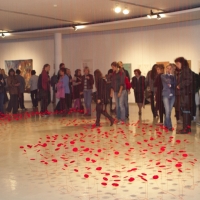 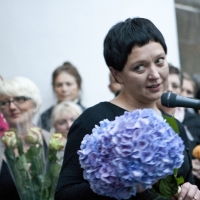 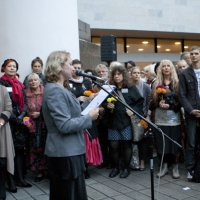 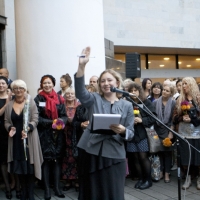 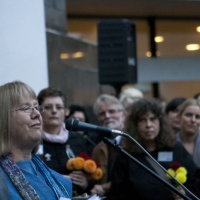 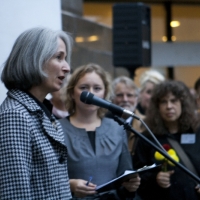 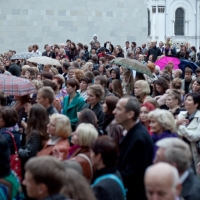 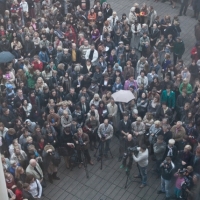 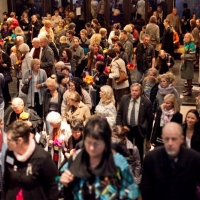 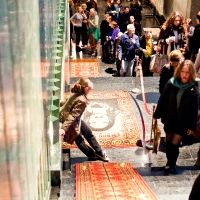 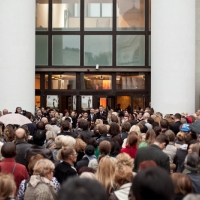 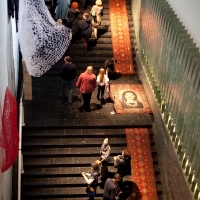 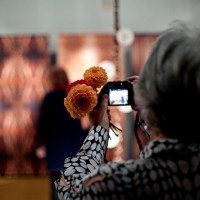