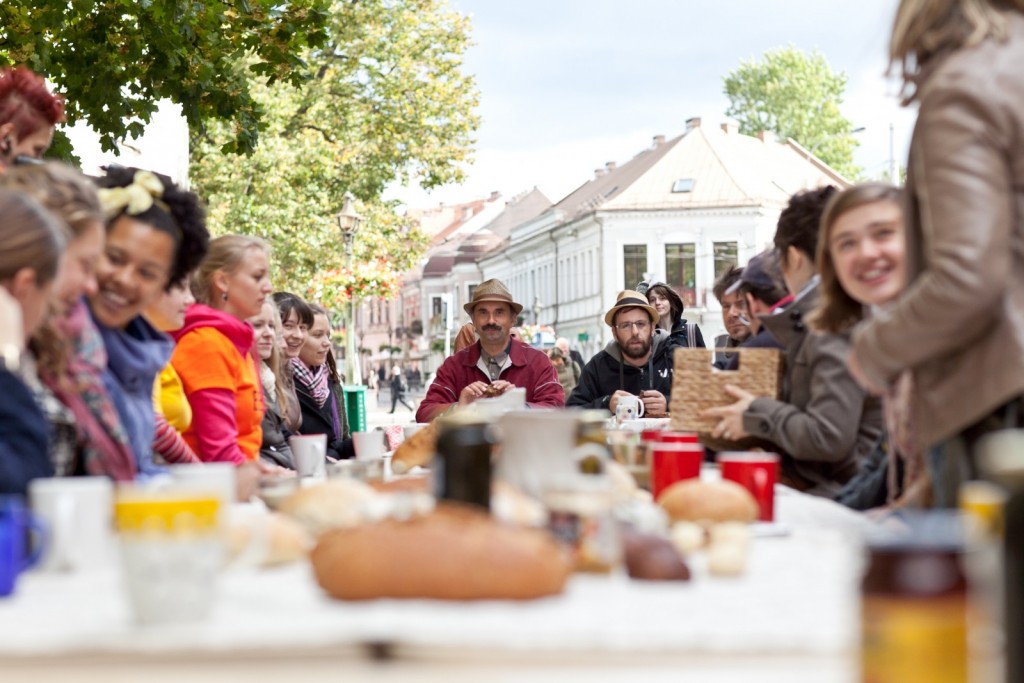 On Saturday, 3 October at 4pm in M. Žilinskas art gallery (Nepriklausomybės sq. 12) a new publication Contemporary Art Biennial as a Site Specific Event: Local versus Global dedicated to the 10th edition of Kaunas Biennial will be presented.

The founder of Liverpool Biennial Lewis Biggs as well as the artistic director of Kaunas Biennial Virginija Vitkienė will take part in the presentation and discussion on the biennial as a global phenomenon of world culture and its interactions with the local cultural field. The editor of the publication Daiva Citvarienė will moderate the discussion.

This publication is an international collaborative project, where world famous exhibition curators, founders of art biennials and art theorists using examples from Liverpool, Bucharest, Kaunas, Sharjah, Taipei and other biennials analyze the local and global paradoxes in the history of the biennial phenomenon.

Today, we can count over a hundred biennials in the world and this number is constantly increasing. The biggest international exhibitions and biennials, such as Venice, Whitney or Manifesta, attract thousands of art tourists from across the world and thus become guarantors of economic and cultural capital.

However, an increasing number of biennials are founded further away from classic art centres. In contrast to the largest art events, where the local community is almost irrelevant, smaller biennials attract, firstly, their local audiences, whose relationship with the event determine its success or failure. For example, Kaunas biennial, founded in 1997 and taking place in the second biggest city in Lithuania, today is considered to be one of the biggest contemporary art events attracting one of the biggest audiences in the country (previous biennials were visited by 40 000–50 000 visitors).

On the other hand, the cultural map marking over a hundred biennials connects the world’s most remote locations, such as Kaunas, Venice or Havana, to a wider global contemporary art network as well as supports the global artistic diversity by creating a variety of new art centres across the world. Often contemporary art biennials function as a necessary catalyst and as an integral part of the local culture.

Thus contemporary biennial phenomenon forces us to speak about the notion of glocal, the continuous tension between global and local. According to the editor of the publication Daiva Citvarienė, “the tension bertween locality of the region and the globality of the art world remains a key aspect of contemporary art biennials. Therefore, seeking to once again reflec ton this phenomenon of global culture, we ask: Can biennials – and do they have to – become experimental platforms reconsidering relationships between locality and globality; get involved in an active dialogue with the local cultural field and at the same time reassess their goals; have long-term impact on local art scenes and local communities? And, finally, what is the future of glocal biennials?”

Contributors:
Lewis Biggs – independent curator of international exhibitions, Chairman of the Institute for Public Art. Between 1990-2000 Director of Tate Liverpool, 2001-2014 – General Series Editor for Tate Modern Artists Series, Tate Publishing. Biggs was one of the founders of Liverpool Biennial, between 2000-2011 its Artistic Director and CEO.
Nicolas Bourriaud – curator of many international exhibitions, writer and author of theoretical essays on contemporary art, in 2015 the curator of “Threads: A Fantasmagoria About Distance” at Kaunas Biennial.
Marieke van Hal – art historian and Founding Director of the Biennial Foundation, founder of European Biennial Network (EBN), long-term coordinator of Manifesta and other biennials.
Michaela Ott – Professor of Aesthetic Theories at the Academy of Fine Arts in Hamburg, author of a number of publications on art and philosophy.
Eugen Rădescu – politologist, cultural manager, curator and theoretician, co-editor of PAVILION – journal for politics and culture and co-director of Bucharest Biennale (with Răzvan Ion).
Skaidra Trilupaitytė – historian of art and culture, author of various texts on cultural and urban policy, public intellectuals, Soviet and post Soviet era Lithuanian art and culture.
Virginija Vitkienė – art critic and historian, curator, since 2003 Kaunas Biennial team member, in 2006 she become the director of the organization and in 2011 the artistic director of the event.
Editor of the publication Daiva Citvarienė – art historian, curator and lecturer at Arts Faculty, Vytautas Magnus University, founder of public memory project www.atmintiesvietos.lt (sites of memory).