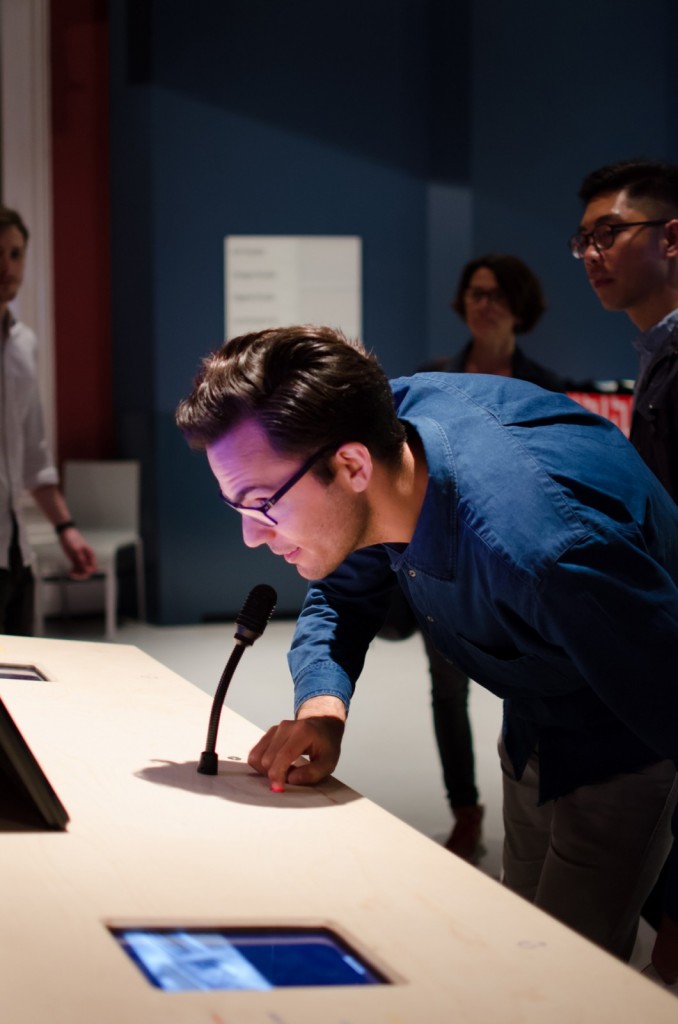 SCHEDULE OF SPEAKERS FOR SEMINAR

THE HAPTIC
MYRTO KARANIKA AND JEREMY KEENAN
Myrto Karanika is an architect and an artist. Her practice touches upon a variety of fields such as spatial design, responsive art, textile art, sound art and biology. Combining soft technologies with traditional art practices like illustration, printmaking, stitching and embroidery, she creates textile-based responsive installation pieces that seek to unravel aspects of perceptual activity and bodily engagement mainly within the context of spatial experience.
Jeremy Keenan’s creative practice has manifested as music, sound installation, and immersive multichannel audio. His current line of practice involves generative composition, live electronic music performance, and sound installation. He is interested in working with imaginary signals, audible and inaudible feedback, the uncanny reconfiguration of familiar audio tools like speakers and microphones, and the communicative possibilities inherent in sound. Jeremy creates aural works using motion, recording, feedback, and light.

TINCUTA HEINZEL
Tincuta Heinzel is an artist, scholar and curator and a member of 2580 Association (Cluj, Romania) and of Paidia Institute (Cologne, Germany). Following Visual Arts and Cultural Anthropology studies, she has completed her PhD thesis at Paris 1 University (France) in 2012. Her area of research is the relationship between art and technoscience, with a special focus on smart textiles and wearable technologies.
Between 2002 and 2003, Tincuta was a fellow of the French Government, and, in 2005, a DAAD research fellow at ZKM in Karlsruhe. In 2010 she was artist in residence at KHM – Kunsthochschule für Medien (Cologne Germany). She initiated, curated and coordinated several projects, such as “Areas of Conﬂ u(x)ence” in the frame of Luxembourg and Sibiu 2007 – European Capitals of Culture. As an editor, she published Art, Space and Memory in the Digital Era at Paidia Publishing House (Bucharest, 2010) and coordinated Studia Philosophia’s issue on the “Phenomenology of Digital Technology” (no.3/2010).  http://www.textiltronics.com

THE PERFORMED
DAVID LITTLER
David Littler is a sonic visual artist and curator, with a particular interest in the relationships between people, place, making and sound. Over a 25 year career he has been both creating, and exploring, the cultures of textiles, and providing opportunities for artists from different disciplines to collaborate, experiment, create and exhibit new work. In 2008, with the support of a Crafts Council Spark Plug Curators’ Award and the British Council, he initiated sampler- cultureclash, an international collective of artists exploring the connections between people, textiles and sound.
sampler-cultureclash has delivered over 30 performances, residencies, workshops and talks in the UK and internationally, working with artists and organisations such as the MNAC, Museum of the Romanian Peasant and Rokolectiv in Bucharest; c-u-m-a in Istanbul; Kaunas Art Biennial Lithuania; Ulster Art & Design Festival; V&A; The Embroiderers’ Guild; Atlas Arts Skye; Future Everything; The Whitworth Art Gallery; Fermynwoods Contemporary Art and many textile groups and educational institutions across the UK.
He has recently curated Yan Tan Tethera: songs of textile folk with the English Folk Dance and Song Society and Is She Blew? the sound of linen at R-Space, Lisburn; two projects that explore the once innate relationship between making, makers and song.
http://davidlittler.tumblr.com / www.samplercultureclash.org.uk

FABIO LATTANZI ANTINORI
Working across a range of mediums including sculpture, print and interactive installations, Fabio Lattanzi Antinori’s work examines the language of power and control of corporate systems, and its effect on the belief systems of the individual. Through his practice he aims to explore the mystical and almost supernatural mechanism by which the dominant political and economic power shapes reality and ultimately informs notions of faith and trust in the society at large. Fabio uses technology as a tool of investigation and to make space for the unexpected. Data, seen as a tool of influence and control, is the starting point for a number of his works, dictating their form and often their functionality.

Fabio’s works possess a superficially simple level of decoding, superimposed on interlaced layers of symbolic meaning to create a metaphor for the language of power and faith. http://fabiolattanziantinori.com

THE NOTATIONAL
JAMES BULLEY
ames Bulley (b.1984) is an artist and composer whose work focuses upon exploring sound composition through site-specific installation, sculpture and systems art.His ongoing Tactus project, an exploration into the creation of a direct artform for the blind and visually impaired, translates written language into tactile sound scores and received an award for its conception from the Leverhulme Trust in 2009. In 2011 the multi-room installation work this is where we got to when you came in at the Bush Theatre (created in collaboration with Non Zero One) won the Off West End Award for Best Entertainment. In 2012, and it all comes down to this, a sonographic landscape installation created in collaboration with artist David Shearing, was awarded the gold medal for Installation Design at World Stage Design 2012. In 2013, as part of a long term partnership with the systems artist Daniel Jones as Jones/Bulley, he was nominated for British Composer of the Year and has since been touring the acclaimed forest- based installation piece Living Symphonies with Jones, commissioned by Sound and Music, the Forestry Commission and Arts Council England.
www.jamesbulley.com

ALEX MCLEAN
Alex McLean is an interdisciplinary researcher working across live coding, pattern in textiles and music, live interfaces for performance, software art, performance art, creative education and digital culture. He co-leads the AHRC Live Coding Research Network, and is principal investigator of the AHRC Weaving Codes, Coding Weaves project, both exercising his interest in unravelling of technology and exposing of code as a linguistic, culturally meaningful medium. He completed his thesis “Artist-Programmers and Programming Languages for the Arts” at Goldsmiths, University of London in 2011, and is now Research Fellow in Human/Technology Interface and Deputy Director of ICSRiM, School of Music, University of Leeds.
Alex is active across the digital arts, including chairing the International Conference on Live Interfaces in 2012, organising over 80 “dorkbot” electronic art events, co-founding the TOPLAP live coding organisation, the Algorave movement, and Chordpunch algorithmic record label. Alex has performed widely at major venues over the past 14 years, as part of many collaborations including the live coding band Slub (http://slub.org) and with live choreographer Kate Sicchio (http://sicchio.com). He currently holds a Composer-Curatorship with the Sound and Music new music agency, and is working on the Oxford Handbook on Algorithmic Music with Prof Roger Dean. http://yaxu.org/

SUMMARY OF PERFORMANCES AND WORKSHOP
Performance – Alex McLean and David Littler
Yaxu – Live coded pattern-based techno Yaxu is the solo project of Alex McLean, live coding suitably relaxed techno including live remixes of his recent Peak Cut EP (released on Computer Club). His screen will be projected, making the code visible, so that the audience can see the flows of text and shifts from complexity to simplicity.
Kaunas will see David Littler and Alex McLean collaborate for the first time, combining their sonic practices inspired by textiles.

Workshop – Alex McLean
Live Coding Pattern with Tidal
Tidal is a language for live coding which allows people to make music from patterns, expressed as code. It has been developed by Alex over many years, initially for making broken dance music at events now known as “Algoraves”, and is now a free/open source software project with a growing community of users applying it to diverse musics. It will introduce Tidal’s notation of polyrhythmic rhythm, its library of pattern transformations, how to combine these simple parts into complex results, and how to use them in performance. In the process, Alex will also show how Tidal can be used to make visual patterns. The workshop will culminate in an algorithmic drum circle, where
participants will be able to copy and paste, and then play with each other’s Tidal patterns.
This is an introductory workshop appropriate for anyone, including those with no programming and/or music-making experience. Participants should bring a laptop and headphones.