A Terrible Love of War shows works that focus on the hidden and domestic aspects of violence. Violence, that finds in war its most evident legitimacy, is something that belongs to everyday life and that becomes domestic in the most understated ways. 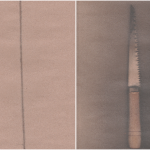 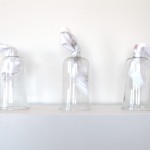 Silvia Giambrone. LET THERE BE LIGHT, 2015 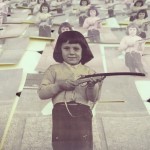 August 6th mon amour has been inspired by the real watch that was found in Hiroshima after the H bomb was dropped, which is now exhibited in the Hiroshima Peace Memorial Museum.

In July 2013 I had the chance to interview two survivors of the atomic bomb. What really impressed me was that both said that even though they survived, the bomb never stopped detonating for them since throughout their whole lives, they had had to hide that they had been in Hiroshima during the bombing. For the H bomb survivors, in fact, it was very hard to find a job or get married, since they ran the risk anytime of falling ill or having ill children. Somehow their lives got stuck after the bomb. Both the survivors told me that the worst time of their lives was not when the bomb was dropped but when they had to deal with love problems. He felt lost when he wasn’t allowed to marry his girlfriend (because of her father’s will) and she felt desperate when she lost her husband. It means that every one of us has experienced his or her own personal little Hiroshima. That’s why I took the image of the Hiroshima watch and I moved the minute hand one minute later and I added the second hand twitching for one second.

Let there be light has been inspired by the well-known Genesis sentence; it has been constructed by assembling a glass lamp and a ‘purificator’ – the tissue inside the glass is in fact the linen cloth used by the celebrant for wiping the chalice after each communicant has drunk from it. So, evoking the shape of the molotov bomb, the glass lamp becomes a symbol of the connection between war and religion, since religion has always been a way through which violence becomes something ‘acceptable’.

Vertigo shows pairs of objects that are apparently threatening each other. They symbolically represent domestic violence.

Mommy’s army is a pop-up paper army made by the pictures I found of my mother as an armed child. Looking uncanny and funny, this work wants to aim at focusing on the domestic aspect of conflict and at familiarization with the idea of war.