Home»News»Meeting with Nicolas Bourriaud in Kaunas 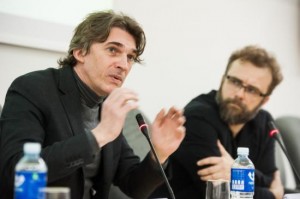 N. Bourriaud will curate the principal exhibition of the Biennial entitled “Threads: A Phantasmagoria about Distance”, in which the artists from all over the world will present their works. By placing emphasis on the new forms of communication the curator aims to highlight the notion of distance [currently a particularly relative concept]. The curator has taken the inspiration for the exhibition theme from the extremely popular theatrical phenomenon of the 19th century – phantasmagoria, a certain kind of cinema, and as N. Bourriaud explains, the predecessor of artistic installations:Nicolas Bourriaud:

Threads: A Fantasmagoria about Distance ambitions both to approach the form of phantasmagoria and address the way today’s artists include the notion of distance in their works: in a globalized and digitalized world, how does art deal with transportation, real time communication? What is the current shape of the presence /absence dialectics? How do artists present absent realities? “Move bits, not atoms”, said the web activist Nicholas Negroponte in the 1990’s.

As a metaphor, Threads also stresses the parallels between today’s art and the spectacle of phantasmagoria, focusing on the similarities with this proto-movie theatre both in terms of techniques and intellectual issues, and lead the way to another possible history of art, where feature films and installations would share a common ancestor.

By doing so, it alludes to the spectral as an emerging mode of visualisation anchored in internet culture: furtive apparitions, gaseous, infra-thin or filigree-like images, pseudo-telepathy, ventriloquy or magnetic phenomenons are part of a new culture of the visible aiming to reconcile science and poetry, technology and image analysis, but in a production context dominated by digital tools.

Based on this link between science, poetry and spiritualism, Threads is an exhibition about art as a system that connects itself to a different time and/or space. The artwork as a telegraphic device, entering in contact with something happening somewhere else, in another realm, world, place or times…

On curatorship and positioning art

In his first visit to Lithuania Nicolas Bourriaud presented his ideas for the exhibition at Kaunas Biennial and also had to answer some questions. Some key questions were: What makes a good exhibition? And what is the role of the curator in developing a visualisation of his own ideas? “I will compare an exhibition to an opera, where the curator writes the libretto and the music is provided by the artists”, – he said. According to N. Bourriaud, the curator should not dominate in any exhibition. A certain balance must be maintained. “Only artists contextualise and visualise ideas. It is them and not the curator, who make art,” – said N. Bourriaud. Therefore, a visitor to a well-curated exhibition has the opportunity to perceive the works from two positions: as a story linked by an underlying problem or to try and understand the perspective of each individual artist.

“I would compare curating exhibitions to camping – an opportunity to broaden the boundaries of your knowledge and as thus to grow your roots by travelling (on a basis of radicant rooting process, when the roots grow outwards on the surface of the soil rather then growing deeper)” – the curator and the director of the School of Fine Art in Paris N. Bourriaud explained the reasons of his visit to a small town of a small country. The curator admitted that he was enticed not only by the country’s geographical but also by the Kaunas Biennial context itself, which is closely linked with the textile culture. In his presentation the curator emphasised the evident change in communication and our thirst for knowledge that have been influenced by the internet and are crucial for the present and future of our culture. “Unique processes, which have never been experienced throughout the human history, are happening all around us. The last known place on Earth was discovered in 2001. Technologies enable us to know everything there is to know about the time in which we now live. Therefore, the only area, which has not yet been explored, is our past. That is one of the reasons why artistic thought still pursues this unknown phenomenon. Nowadays, when the amount of information received by us everyday is enormous, the goal of the curator is to offer a new way of thinking, a different point-of-view,” – N. Bourriaud spoke about the challenges of curating. The theorist believes that globalisation has pushed localisation to the front of our attention – small communities and small worlds, even the concept of culture created by individual artists’ today is more important than the megacities or large structures. That is why the city as a place – Kaunas, Taipei and Paris, in N. Bourriaud’s cultural understanding is much more important than the countries (Lithuania, Taiwan or France).

N. Bourriaud (born in 1965) is the director of the School of Fine Art in Paris (fr. Ecole Nationale des Beaux-arts de Paris) since 2011. Before, he was the Head of Studies Department at the French Culture Ministry, worked as a curator for the Gulbekian Foundation for Contemporary Art at Tate Britain gallery in London (2007–2011) and as an advisor for the billionaire Victor Pinchuk Foundation (Ukraine, Kiev). Nicolas Bourriaud is also significant to the Paris cultural landscape as the founder and co-director, together with Jérome Sans, of the Palais de Tokyo exhibition space (1999–2006). In recent years, N. Bourriaud has been added to the top ten list of the world’s most influential curators.

In the art world N. Bourriaud is not only well-known as an exceptional exhibition curator but also as the author of the widely discussed contemporary art theory books “Relational Aesthetics” (1998), “Postproduction” (2002) and “The Radicant” (2009). Currently he is working on his fourth book entitled “The Exform”, which will be published in 2015. The philosopher did not deny the fact that the ideas being tested in Kaunas can become the basis of his fifth book.

The latest N. Bourriaud curatorial projects have become live laboratories for his ideas including “Estratos” in Murcia (2008), “Altermodern” at Tate Britain gallery in London (2009) and “The Great Acceleration/Art in the Anthropocene” (Taipei Biennial 2014). Currently, one of N. Bourriaud’s laboratories is the principal exhibition of Kaunas Biennial 2015 “Threads: A Fantasmagoria about Distance”.

Kaunas Biennial 2015 – attention to sound at the visual arts fiesta

As stated by the Kaunas Biennial artistic director Virginija Vitkienė taking the concept of Thread from the curator Nicolas Bourriaud (which defines both modern online communication and the conceptual Kaunas Biennial link with textile culture), the organizers came up with the title for the entire biennial programme: NETWORKED ENCOUNTERS. The title emphasizes the principle of biennial’s communication strategy – an increase in face-to-face meetings between artists (in collaborative projects) and artists and audiences (through events, meetings, performances). The only contemporary art biennial in Lithuania is organized by a non-governmental organization founded on the principles of dynamics and flexibility in collaboration with more than 20 local and foreign partner organizations, creating and championing audience development strategies and attentiveness to establishing international platforms for emerging artists. Directly reaching over 20 percent of the local population and attracting a lot of foreign guests, Kaunas Biennial is newly conceived every time by changing the structure of the event, the nature of its exhibitions and events, concepts and curators. This year sees the 10th anniversary of the Kaunas Biennial where visual arts will be linked with music and sound: video and sound installations will be presented in exhibitions, performances, music concerts and experimental sound projects will take place throughout the biennial period.

Alongside the principal exhibition curated by N. Bourriaud, the biennial will present a number of European projects in collaboration with foreign partners, including the international emerging artists’ residency as well as interdisciplinary video and audio projects, created and delivered in a number of European countries. The educational programme will include seminars with curators and artists from all over the world, tours, workshops and lessons for schoolchildren delivered in gallery spaces.