The art practice of KONSORTIUM is based on a dialogue between the three collaborating artists. It refers to the history of art and reflects various threads of art expressions. The roots of modernism, in particular, have a deep impact on the work of KONSORTIUM. In their complex installations they draw on sources such as monochrome and abstract painting, but also the figurative or pattern-like. KONSORTIUM works are text-orientated and film-based. The combination of different elements, the clash of heterogeneity, the collapse of sense and the hush of interpretation is intended in their practice and as the goal of their activities. Hereby the space and its history provides the important possibility for order and a coherent total. 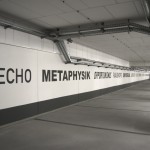 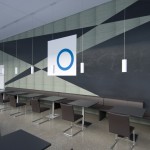 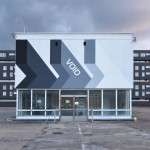 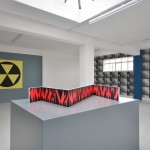 ”No illusions, no fantastic ideas about us and the rest of the world! We have slaked the emptied husks of art history and revived its slogans. Modernist utopias are our leitmotifs, each one a weapon of our hatred. Disappointment, pallidly radiating from the past. Wallowing in valedictions with Hegel and Ad Reinhardt, no farewell and no departure—just holding firm to the very end. It’s all about attitude, not form! No content, no form. Only lost gestures of times gone by. Our ethos is desolate defiance, the pride in the rebirth of exhausted slogans that we hurl at the faithful Conceptualists. Our works are tired flames that incinerate everything in their tracks. Nothing is holy. Qualities are nothing other than the frightened, succouring unction of those destitute aesthetes with hearts still set upon composition. They are to be spared—let them stir from their blind intoxication, clueless and fearful; let them console themselves in their domestic aquaria. We have buried our faith and battle proudly on, demise a certainty breathing down our necks. Let’s hoist our flags and rally to Marsyas’ call! No illusions, only empty forms and dead slogans.“ (Konsortium – Sebastian Freytag, 2007)

Founded in 2004 by Lars Breuer (*1974 in Aachen DE), Sebastian Freytag (*1978 in Hanover DE) and Guido Münch (*1966 in Essen DE). Following overlapping studies at the Kunstakademie Düsseldorf, Konsortium was best known for their project space on the then-unfashionable east side of Düsseldorf. After seventy-five exhibitions, the gallery shut in 2010, yet continues to organize exhibitions and produce new work worldwide.

Konsortium have also participated in group exhibitions at Museum Morsbroich, Leverkusen DE (2010) and Museum ZKM / Museum of contemporary art, Karlsruhe DE (2008). In 2014 Konsortium was part of a common project of Kunstmuseum Mühlheim DE, Skulpturmuseum, Marl DE and Art collection of the Ruhr-University, Bochum.

In addition to their former project space (2004-10), Konsortium has organised group exhibitions at Sydney College of the Arts (2009), a joint exhibition at the Kunsthalle Düsseldorf and Kunst im Tunnel (2007), and are in preparations for Dystotal, a two-part curatorial project with the Pori Art Museum (2014) and the Ludwig Forum, Aachen DE (2016).

Besides their collective projects, Lars Breuer, Sebastian Freytag and Guido Münch, the three artists of Konsortium, are working on their individual careers.