Transformations of textile and energy – growth and downfall

The project builds on the period of prosperity and downfall of the Lithuanian textile industry from 1960 to 1998 – the not so distant times of cooperatives. The aspect of downfall and transformation is the most interesting in these economic processes. Energy accumulated during several decades did not go away with the collapse of textile companies and gigantic industrial machines, but instead shattered into myriads of knitting cooperatives scattered across homes, basements and garages. This energy like a powerful charge amassed by the industry migrated to the personalities of textile artists and prompted the rise of the conceptual phenomenon of textile art in Kaunas.

The culmination and the breakdown of the planned economy as well as the times of cooperatives are revealed through colourful personal stories and accounts of former textile industry workers. The archive of these stories collected by Darius Petrulis and his insights became a script for the grotesque performance of the Psilicone Theatre titled Hairy Hairy Mouth. 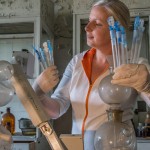 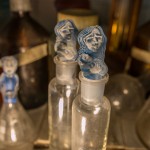 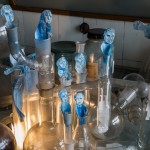 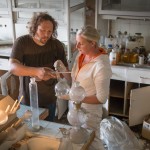 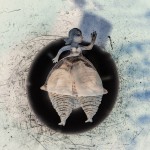 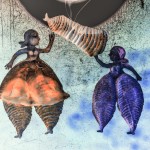 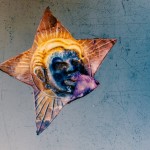 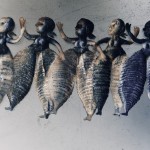 The characters of the show came from accounts of the pioneering textile industry designers Veronika Dabkienė (born in 1927), Rūta Jakubonienė (born in 1930) and Zinaida Dargienė (born in 1936). These former textile workers took part in the establishment of major factories and encoded the industrial breakthrough through the language of art. The surrealism of the planned economy reflected in their memories was the main inspiration behind the visuals of the show.

Other characters and their stories were born from coincidences. For example, when Darius Petrulis was hitchhiking from Panevėžys to Kaunas in 1994, he was picked up by a white Russian VAZ car. The constantly speeding fussy driver confessed to Darius that he had been a security officer of a big Kaunas-based textile company, and had just been released from prison where he had done time for the notorious theft widely covered by the press from 1987 to 1988. The guard had been paying a “fee” to the management of the factory for allowing him to steal yarn that was in high demand at the cooperatives. He had done well by himself and the case became the pinnacle of his career. He was proud to have become famous. In 1998 the hero was found dead near the Marijampolė car market, supposedly murdered for unpaid debts.

Another shocking story was told by the former technologist-veteran of the Kaunas Synthetic Yarn Factory, who used to work there for 41 year. There was a pipe within the territory of the facility which would dispose chemical waste. The sludge looked quite impressive – it was colourful, glowing and viscous. There’s no surprise local kids would secretly climb over the fence to collect it. When caught by the guard, they even confessed using the waste as a lollypop…

These subjective accounts open up another dimension of the textile industry. Hairy Hairy Mouth looks into the history of economics through the tools of art with an aim to expose universal cultural content, and to find a versatile recipe of survival applicable to the modern society.

The music was composed and is performed live during the show by the jazz trio Chui from Croatia. Toni Starešinić, Vojkan Jocić and Janko Novoselić recall similar economic processes in the former Yugoslavia. The silicone characters were created by Auksė Petrulienė – the jittery factory guard and the marsupial female workers with an ability to conceal stolen yarn within their bodies. The main character is the factory itself – an ever-wakeful creature filled by changing shifts of workers.

Eventually empty and sleeping, the Synthetic Yarn Factory will be briefly woken by the actors and viewers of the Hairy Hairy Mouth. The premiere will take place in the film theatre of the factory – the former lair of Communist propaganda. The interior of the 1970s is still intact. The curtain of the screen has been decorated with the local fabric, and the special mechanism opening the curtain is still operational. There is also the projection room with a steam punk machine and a huge ice-cream cart behind the scenes. Everything looks like it was abandoned yesterday, except for the white drapes covering the windows – the fragile fabric has been disintegrated by sunlight and makes subtle decoration for the action in the hall.

The Psilicone Theatre was founded by Auksė Petrulienė and Darius Petrulis in 2005. The creation of the scripts often involves different groups of people – from sports veterans to former convicts. Their personal stories, newspaper headlines and other everyday texts are transformed by the Psilicone Theatre into audiovisual performances. The characters are miniature silicone dolls. The process is a kind of live animation created before the eyes of the audience. The movement of elastic, viscous dolls is filmed and projected as a huge colourful video projection accompanied by live music. The shows of the Psilicone Theatre take place on Lithuanian and foreign stages as well as in venues that are not specifically intended for art, such as spaces between apartment blocks, swimming pools of sports clubs, and abandoned wastelands.

Chui are an up-and-coming young trio from Croatia who have developed their own rather unique take on jazz. Their potent blend of dance club rhythms, jazz vocabulary, turbo-charged jazz/rock fusion and an uncompromising commitment to groove permeates their first album from start to finish and has them firmly entrenched as a mainstay on the Central European music scene. At the end of 2013 their second effort was released by Dancing Bear Records to widespread critical acclaim and even greater enthusiasm from their dedicated fan-base. Their all-star line-up brings together three of the top cats on the Croatian scene: Toni Starešinić – keyboards & electronica, Vojkan Jocić – sax & electronica, Janko Novoselić – drums.