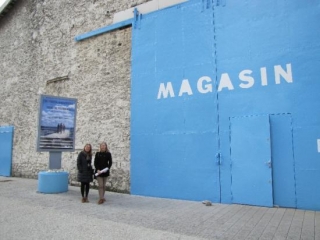 “The past is never dead. It’s not even past.” This famous statement by writer William Faulkner resonates so cunningly with contemporary sense of the past that it already entered popular culture. On one hand, it is expressed as a predilection to “memory industry”, an addiction to excessive memory that leads to complacency and collective self-indulgence, but on the other hand, it expresses the deeper interest in awakening meanings and interpretations lying dormant under the layers of the dominant narratives about the incomplete histories of traumatic social events. The presentation looks into some examples of artistic and curatorial approaches that tackle charged, contested or suppressed issues of history”. (N. Ilic)

Nataša Ilić  is a freelance curator and a member of the curatorial collective What, How & for Whom / WHW. WHW’s more recent exhibitions are One needs to live self-confidently… watching, Croatian pavilion at the 54th Venice biennial, (2011), Details, Bergen Kunsthall, Bergen (2011), Second world, steirischer herbst, Graz, (2011), How much fascism?, Utrecht and Extracity, Antwerp (2012), Dear Art, Moderna Galerija, Ljubljana, and Calvert 22, London (2013). Currently with WHW she is curating Meeting Points 7, a multidisciplinary contemporary arts festival focused on contextualized presentation of artistic production from the Arab World, taking place in Zagreb, Antwerp, Hong Kong, Beirut, Moscow and Vienna (Sept 2013-June 2014), and Really Useful Knowledge, an exhibition on the notion of ‘anti-pedagogy’, Museo Reina Sofia, Madrid, Oct 2014. Ilić lives and works in Zagreb and Berlin.

Born in 1979, Lore Gablier studied at the Fine art school in Valence (France) where she graduated in 2005. In 2006, she completed her studies at the curatorial training program of the École du Magasin, in Grenoble, where she co-curated the project A Step Aside, a program of discussions and activities focused on alternative ideologies and political engagement. In 2007, she participated in the collective translation of historical conceptual art works for the anthology Art conceptuel: une entologie (éd Mix) and in 2008, edited The Popescu Chronicles (éd BC & compagnie), a project by Moldavian artist Ghenadie Popescu. In 2009, she co-curated Cornelius Cardew and the Freedom of Listening, an exhibition devoted to the English composer Cornelius Cardew which was presented in the Contemporary art center in Brétigny, at the Künstlerhaus in Stuttgart, and at the Culturgest in Porto. Since 2008, she is guest curator and editor at Le Générateur (Paris) where, in 2009, she initiated in collaboration with Anne Dreyfus an annual festival of performance art. Since 2009, she is also the coordinator of the curatorial training program of the École du Magasin.

Founded in 1986, Le Magasin – Centre National d’Art Contemporain de Grenoble, France is a prestigious contemporary art centre which is very well-known by its intellectual, educational and academic activities throughout the whole Europe and beyond. Yves Aupetitallot, the Director of Le Magasin, is the founder École du Magasin – the first curatorial school in Europe. In Le Magasin, there are many personal exhibitions presented by very famous artists, such as Daniel Buren, Sol Le Witt, Robert Barry, Lawrence Weiner, Michelangelo Pistoletto, Gino De Dominicis, Sylvie Fleury, Mike Kelley, Maurizio Cattelan, Liam Gillick, etc. It is the first time when Lithuanian artists (Vytautas Vitžbickas and Deimantas Narkevičius, 12 10 2013 – 05 01 2014) are being presented in this centre.

A personal exhibition  by Vytautas Viržbickas “How Do I Tell You a Story You Already Know? You Don’t”. It is exhibited in Le Magasin (Grenoble, France, 12 10 2013 – 05 01 2014). [At the same time, personal exhibition by Deimantas Narkevičius da Capo is presented there].

The project is supported by: Ministry of Culture of the Republic of Lithuania and Kaunas City Municipality