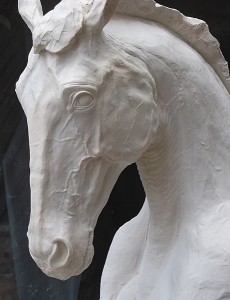 On 12th October 2013 – 4th January 2014, Kaunas Biennial will present a personal exhibition “How Do I Tell You a Story You Already Know? You Don’t” by an emerging artist Vytautas Viržbickas. It will be exhibited in Le Magasin, National Centre of Contemporary Art (Grenoble, France).  This project is a continuation of Kaunas Biennial Emerging Artists’ Projects far beyond the borders of Kaunas and Lithuania.

The exhibition, with its mysterious title, of Vytautas is created from various sculptures, objects, and other things. In these compositions with their individual objects, (they are constructed, whittled, founded, sewed, broken, and glued by the author) a mythical story is being told.

In this three-part mythological narrative, there are some heroes: a white horse sitting in an offended dog’s position, a table which “surrends“ itself (two table legs are off the ground), a “buffet” with a floating iceberg, and loose-limbed bugs which are on their back. These heroes will invite the visitors wander the spaces of our subconsciousness.

An art critic Danutė Gambickaitė precisely names Vytautas’ art: “it is the deliberate confusion of the narrative”. She claims that the viewer doesn’t know (and will never know) the “main” story, but he will always feel whether it’s there or not (in this case, that is not important), and will see the hints he has left, and in this way experiencing the emotional tension of not knowing.

Another art critic Jolanta Marcišauskytė-Jurašienė, who analyses Vytautas’s polysemantic exhibition, states that this work is “about a story that doesn’t want to be told but is akin to the issue of the mythopoetic men’s movement in a number of aspects. It’s a way of thinking that is based on exploring your true nature and returning through personalized myths. This is done through a poetic glance, giving priority to impulses, rituals, and the experience of initiation or becoming. By elevating up his story and making each element and detail of a multi-layered work with his own hands (it’s not important if it’s the shattering of a vase and the gluing together of them or the making of a basket for a hot-air balloon), he performs a kind of ritual. Wanting to say what hurts, he had to examine his wound in detail, while the work with his hands, well-executed technique and variety of material demonstrates not only the spectrum of his knowledge of techniques, but also a drowning in a creative act that has its own power of an initiation that purifies and prepares”, writes the art critic in a catalogue of the exhibition. 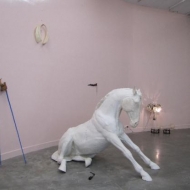 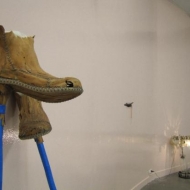 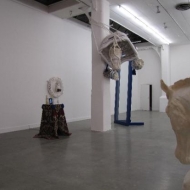 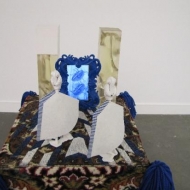 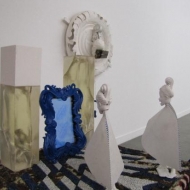 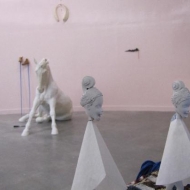 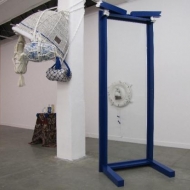 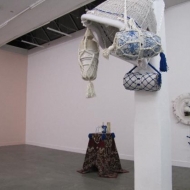 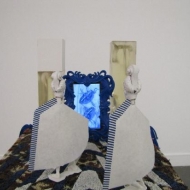 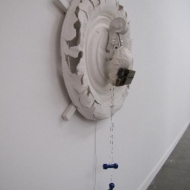 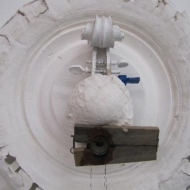 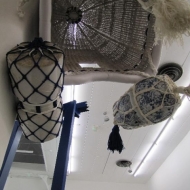 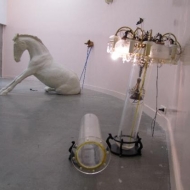 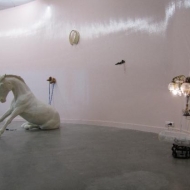 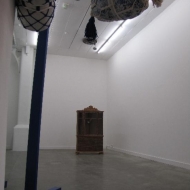 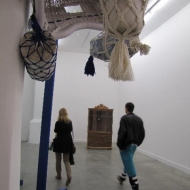 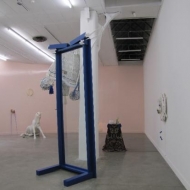 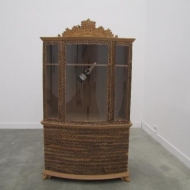 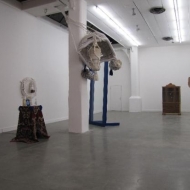 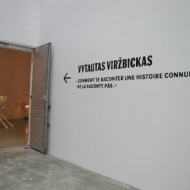 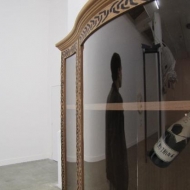 Founded in 1986, Le Magasin – Centre National d’Art Contemporain de Grenoble, France is a prestigious contemporary art centre which is very well-known by its intellectual, educational and academic activities throughout the whole Europe and beyond. Yves Aupetitallot, the Director of Le Magasin, is the founder École du Magasin – the first curatorial school in Europe. In Le Magasin, there are many personal exhibitions presented by very famous artists, such as Daniel Buren, Sol Le Witt, Robert Barry, Lawrence Weiner, Michelangelo Pistoletto, Gino De Dominicis, Sylvie Fleury, Mike Kelley, Maurizio Cattelan, Liam Gillick, etc. It is the first time when Lithuanian artists are being presented in this centre.

In 2012, Vytautas Viržbickas graduated Vilnius Academy of Art. His works of art are deeply contextual: he creates local installations, where sounds, images, and things, as well as their interrelations and intuitive stories, are very important. In Lithuania, he has had several personal exhibitions.

A personal exhibition “How Do I Tell You a Story You Already Know? You Don’t” by Vytautas Viržbickas. It is exhibited in Le Magasin (Grenoble, France, 2013 10 12 – 2014 01 04). At the same time, personal exhibition by Deimantas Narkevičius, as the main artist, is presented there.

The project is supported by: Ministry of Culture of the Republic of Lithuania, Embassy of Lithuania in Paris, Kaunas City Municipality, Vytautas Magnus University.